After my San Francisco trip, we headed on down to Vegas via airplane. We arrived early in the evening but the lights of Vegas’ night life seemed to have zapped away whatever tiredness we felt that day.

Here are a few photos I took while above the clouds and deserts en route to Las Vegas. 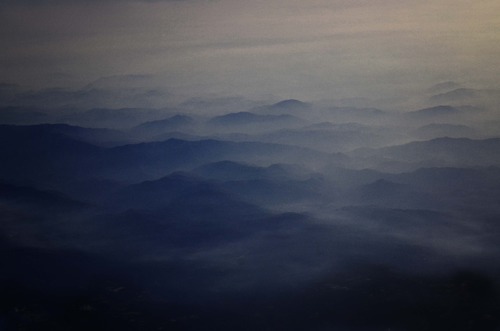 Sea of mountains? Looks eerie and beautiful at the same time. Shooting star… Or, you know, alien space ship… or Superman. Could be anything. I am in the US, after all. Thank you for choosing Southwest Airlines!

After being whisked away to our hotel once we arrived, I took the chance to take photos of our hotel’s driveway. The hotel’s name is Vdara. It doesn’t have it’s own casino but it’s still pretty cool. It’s connected to the Bellagio, I think… And in front of our hotel is this. Anyways, this is our room. It was really dark so I couldn’t really take good enough photos. 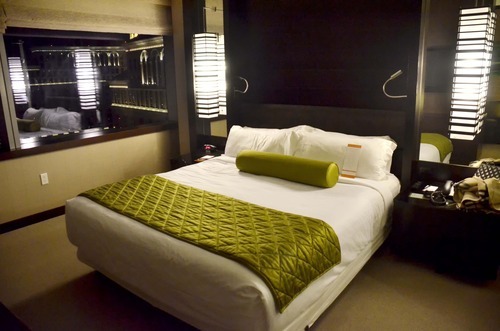 The bed. Out the window, you can see part of Caesar’s Palace. The hotels here are pretty tight. LOL 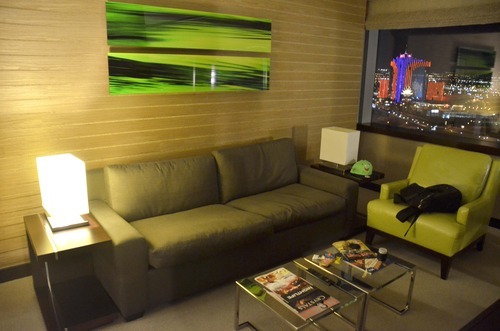 This part of the room contains the sofa that turns into a bed. This was where I slept. Four of us in one room (ssh, it’s not supposed to be allowed), two on the bed and two on the sofa bed.

It was pretty fun bending the rules because every time staff came into the room to check, the “extra people” would all go hide out in the bathroom or in the next room (which is connected).

Once we were all settled in, we waited for 7 pm to strike so we could all start our 24 Hour Buffet. Yep, you read that right. 24 Hour Buffet. Basically, it’s this buffet promo in Vegas that allows you to eat at any of the participating buffets in the participating hotels in the strip within 24 hours of purchase. We chose 7 pm so we could all have dinner at 6 or 7 the next day and still cover breakfast and lunch. I’ll be covering the food part of our trip in my Food Blog. (<– click to see the site!)

Anyways, we head out and I took photos of some of the things I could take photos of while inside the car. 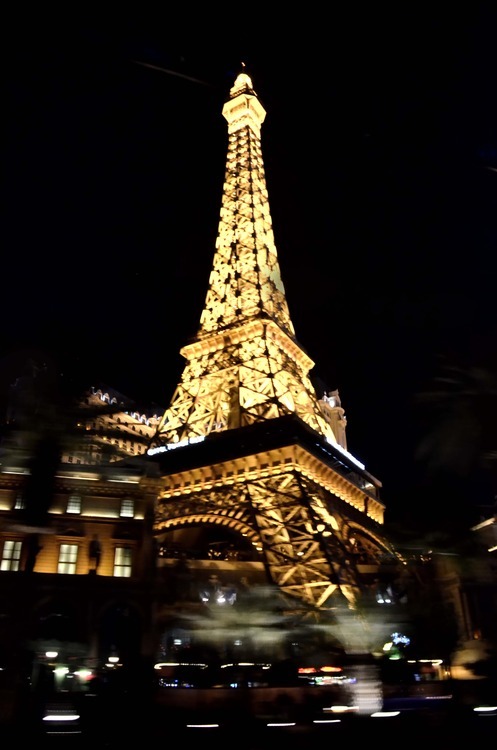 Sorry for the blur, but here’s the Eiffel Tower from Paris Las Vegas hotel. Someday, hopefully, I can visit the place with a special someone. Here’s another Paris Las Vegas photo… I think we just turned a curb here and Paris was all I saw. .___. We all went inside Bellagio Hotel after dinner and took photos around their fall-themed atrium. It was like stepping into a different world! There were autumn flora and fauna everywhere. 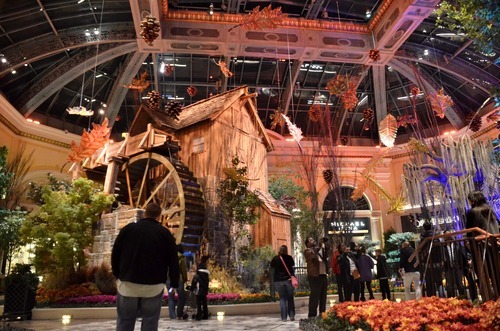 They installed a watermill that was almost as tall as the roof! It also had real, running water. My favourite tree! It looked so cool! The other tree that everyone else loved… only because it’s eyes move and it talks. Psh. 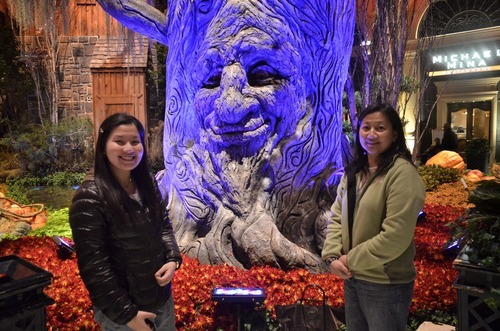 While everyone took photos with the ‘moving tree’… 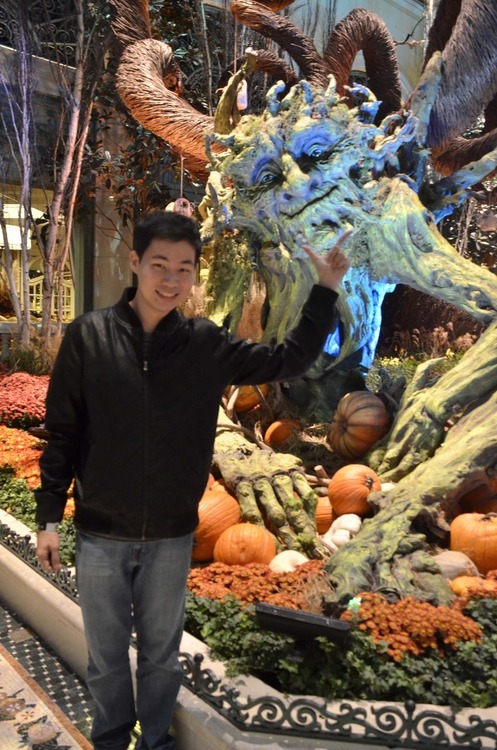 I was taking photos with my favourite! 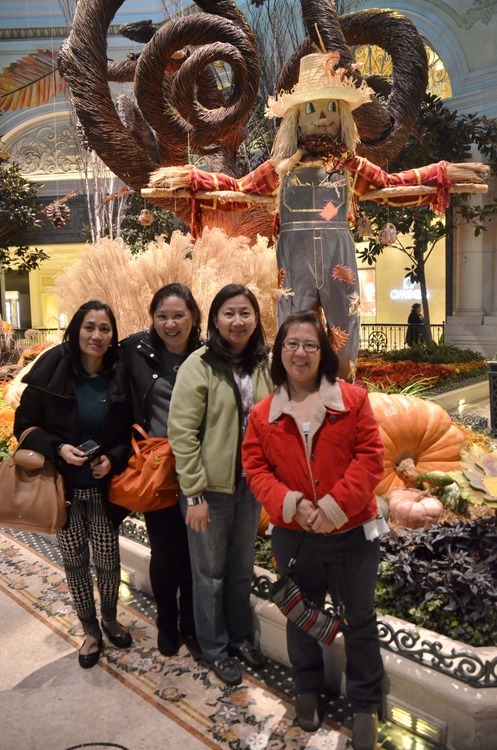 The Golden Girls had their own favourite. The not-so-scary scarecrow!!

We saw some pretty huge pumpkins displayed there… Didn’t think they were real but turns out… they were. They were gigantic. O_O I could fit inside them, curled up, of course. 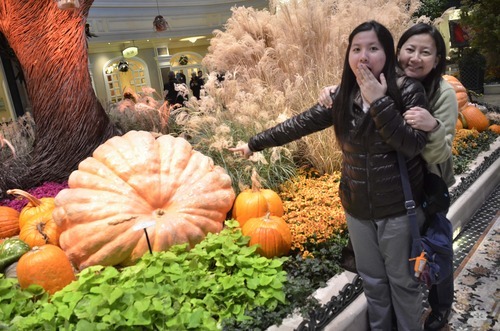 There were also tons of smaller pumpkins.

After we’ve used up a lot of time taking photos of the area, we headed out to the main lobby of the Bellagio where we found one of the famous work of the glass sculptor Dale Chihuly.

Above the ceiling is a coffer filled with the most extraordinary looking glass sculptures in varying colours. It’s actually a chandelier and it’s named Fiori di Como. This is, by far, the best looking chandelier I’ve ever seen. I’d want it in my house! After we’ve raped the ceiling with our eyes and cameras, we started to head out of the hotel to see what the Bellagio is really famous for.

Here’s a photo of their casino by the entrance. And here’s a photo of us, well.. them.. having fun with the rotating doors of the hotel. Aaaand, we were out! Guess what hotel was directly in front of the Bellagio? Yep. More of the Eiffel Tower for you guys. LOL. I can’t believe I didn’t take photos of the other landmarks!! So by now, we’re out by the large… lake… thing… where you can find the The Fountains of Bellagio. You guys may have seen some of the videos of the fountain’s shows on youtube but I tell you, seeing and hearing the whole thing up close is just… magical. I am very thankful for the experience. We got to view two performances that night! And here are the crappy photos I took. I didn’t know if I wanted to watch or take photos… so… forgive me. You can google/youtube more on this, and you should! 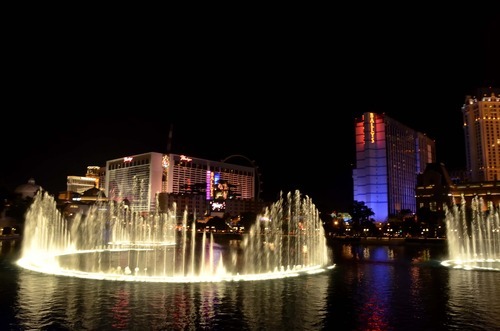 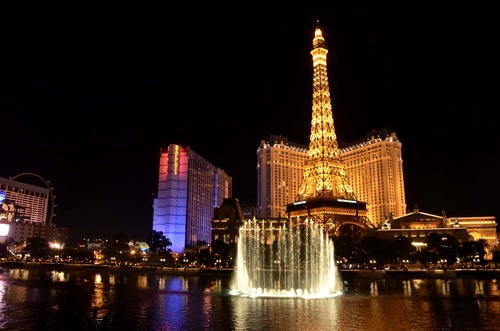 And that’s about it for my Vegas trip. The next day, we all went to see the Grand Canyon! Stay tuned for a blog post on my trip to the (then) freezing wonder of the world!