There’s a hidden gem within Davao City that serves affordable yet flavourful barbecued meats! A group of friends were talking about a One Garnet that they wanted to go dine at and they all knew what and where it was. I thought they were talking about something Dungeons and Dragons related because the name sounded very fantastical. They explained it was a place that serves a variety of delicious barbecue that doesn’t hurt your wallet! I was hungry that time and I only got hungrier while they told me about this mystery BBQ joint. I honestly have never heard about One Garnet so I was drawn to it by more than my growling stomach; my interest and curiosity were piqued!

We drove to One Garnet, which is located at… 1 Garnet Street, Marfori Heights, Davao City. Now you know where the name came from. We visited early, around 4PM, for dinner because my friends told me they sell out really quickly. We were the first ones there, and as I stepped down of the car I fell in love with the place.

One side of the white wall is adorned by a painting of the words ‘One Garnet’ inside a red circle, and wisps of branches reaching towards the logo. Simple, eye-catching, and fun!

It turns out One Garnet is just the backyard (or front, I don’t know…) of the house of the BBQ joint’s owner, which I found very rustic, homey, and appealing! They set up tables and chairs around the space and hung lights overhead. The place looked dreamy, awash in the late afternoon sunlight. 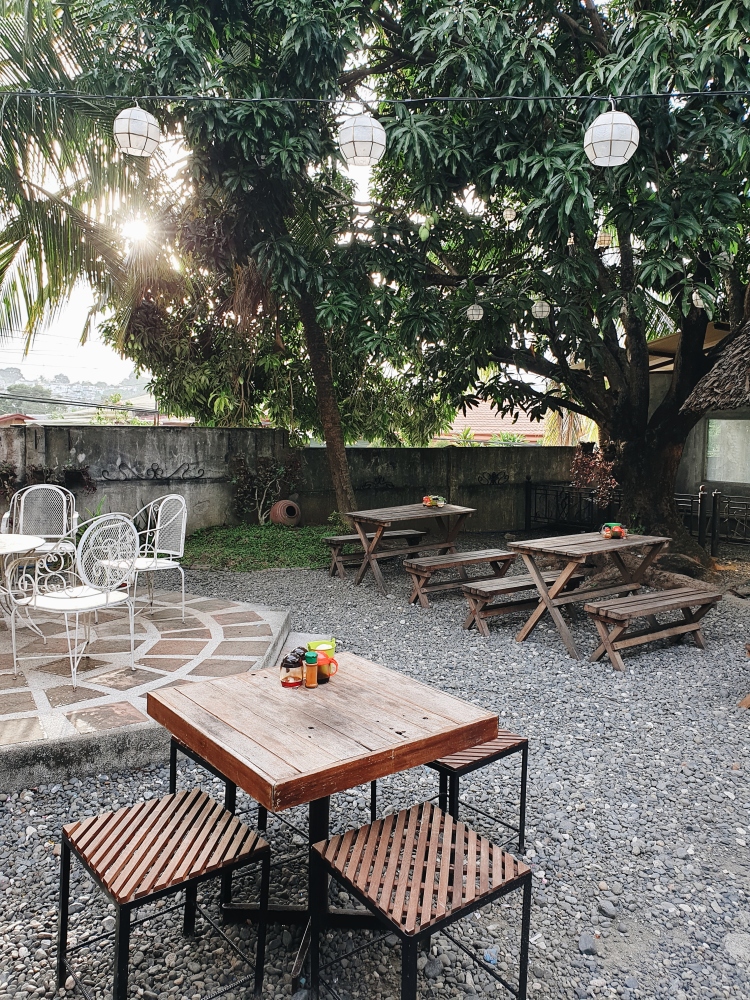 Each table has its own set of condiments, and among these is a container of annatto oil, or what we like to call ‘chicken oil’. This is usually used to add color to dishes to make them more appealing, but my friends and I (and most Filipinos) drizzle it over BBQ and rice! (Drizzle is an understatement, really.)

Once we’ve chosen our table, we went back to the front to choose which sticks of meat we want to order. There’s the usual Pork BBQ, and Isaw (chicken intestines). Then there’s boneless Chicken Inasal, boneless Lemon Chicken, Chicken Yakitori, Maskara, Gourmet Sausage, and Longganisa (Spanish sausage), among others. Each stick of BBQ is only P15 (except for the Inasal and Lemon Chicken which are P40 each). Seeing as they are very affordable, I went crazy and got A LOT.

Once you’ve chosen your orders, they proceed to grilling it while you wait.

This is the other wall outside the BBQ joint. It’s not as bare as the white one but is adorned by colorful paintings of leaves and a woman with really fabulous pink hair!

They serve your barbecue as soon as it’s done grilling to perfection. Some are coated by their special sauce, the yakitori sprinkled with sesame seeds.

My absolute favourites out of all my orders are the Lemon Chicken and the Chicken Inasal. These are bursting with so much flavour that I didn’t even need soy sauce to accompany them! Plus, I LOVE how it’s boneless! You can just bite right onto the stick without having to worry about picking out the meat that cling to the bones! I also noticed that the skin on the Inasal and Lemon Chicken were crispy, which is totally unlike the usual chicken barbecue I’ve ever tried. That was a very welcome surprise!

The Yakitori, isaw, and pork BBQ were delicious and also packed with flavour! You should definitely try them all out when you get to visit. You’ll find a sumptuous, budget-friendly meal in an idyllic backyard setting. You won’t regret it! I highly recommend going around 4 or 4:30 in the afternoon, like we did.