As an avid reader living in the Philippines, I am fortunate enough to buy and read some of the most popular books being released in the market but our selection here is limited compared to countries like the US, Canada, and the UK. That also means we don’t get a lot of chances to meet authors, especially if you live outside of Metro Manila where most events are held, be it with regards to books, music, entertainment, etc.

So when Amazon Best-selling Author Rae Knightly contacted me last year via my bookstagram account to offer to send me the first book in her Middle-Grade Sci-Fi series, I was over-the-moon happy and said yes. A few months later, I received the book and I immediately got to reading it. 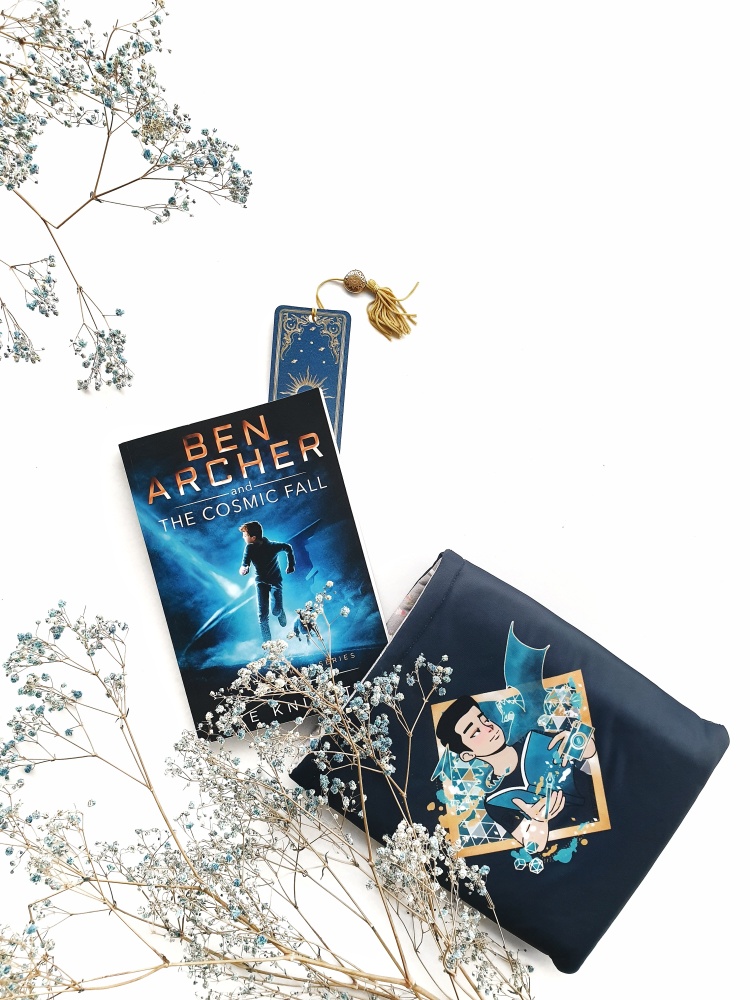 Her book Ben Archer and The Alien Skill was my very first sci-fi middle-grade read and it was definitely something new for me. I’m used to more fantasy type books and have only recently delved into books that explored outer space and introduced aliens. But it was a fun and engaging read with thought-provoking elements thrown into the mix, and I can’t wait to find out what happens next to Ben Archer.

I have been able to keep in contact with Rae via Instagram and I asked her if she would be okay with doing an interview for the blog. And since this post is published, that means she said yes!

Without further ado, let me introduce you to Rae Knightly!

How would you describe or introduce yourself to new readers if you had to write it in the style of a book synopsis?

A new sci-fi author for teens emerges from obscurity.
From the western shores of Canada to the moons of Saturn, Rae Knightly takes the reader on an incredible journey, where ancient cultures, damaged ecosystems and a looming threat from alien invaders are just a few elements that can be found in her Amazon bestselling series, The Alien Skill.
Rae’s travels across the globe have shown her the importance of working together to save it, because our planet is worth it and, well, because we have no other.
As one Goodreads describes The Alien Skill Series: “This story jumps right out of the gate and runs all the way through to the end. I couldn’t put it down! The eternal plunder of our beautiful planet by us humans and it’s devastating consequences is put on debate by the advanced aliens, making it thought-provoking and realistic. True intentions are discovered, friends and foe revealed. It has been a riveting and captivating pleasure to read this series. A high adrenaline rush of a read, apt for all ages.”
You can often find Rae fending off black bears on the trails of British Columbia, or daydreaming on the seawall of Vancouver, though, when she is not writing about aliens, she most of all enjoys the company of her human family.

One of the most popular problems authors experience is Writers Block. How do you handle it when it occurs?

I certainly struggle with writer’s block. It bothers me because I have stories in my head that want to come out, but I somehow end up staring at a blank page for hours. When I suffer from writer’s block, I worry that my characters have abandoned me, never to return. I’m also gripped by fear that no-one will like my stories, and I’m assailed by self-doubt.
Fortunately, I have a bit more experience now, and I know that, when this happens, it’s time to shut my computer, take a step back and breathe. A day, a week, even a month can go by without me being able to write. But I take it a sign that I need to focus on other things, go for walks, exercise, let my mind wander. And it usually turns out that writer’s block creeps in when a story needs to mature, or when there are plot holes I haven’t attended yet. Taking a break and convincing myself that I can’t please every single reader in the whole wide world usually calms my fear and self-doubt. And it’s also during these ‘breaks’ that genius ideas drop into my lap.
Last year, during a bout of writer’s block, I had a massive lightbulb moment when I realized that two separate series I’m working on actually have the same origin. That’s when I wrote the sci-fi novella “The Great War of the Kins”, available to subscribers of my mailing list (www.raeknightly.com). When you read all six books in the Alien Skill Series, you will find the link!
So when you have writer’s block, sometimes it’s good to just go with it and not pressure yourself too much. Trust your inner writing skill: you will know when it’s time to switch on your computer again.

I’ve read that you’ve been to a couple of places around the world, like Mexico and Cape Town. Any travel goals or plans in the future? Would you visit the Philippines?

I used to spend all my money on traveling. I even lived in Mexico, Scotland, Arizona, Belgium and, now, Canada. This has opened my eyes to the world, and I now understand that there isn’t one single correct way to live, one correct language or one culture that is better than the other, but rather, many different languages and cultures that, together, make this world so rich. I’ve settled down now on the West Coast of Canada (where parts of The Alien Skill take place). I don’t have any travel plans in the immediate future, though I’m sure that will change as soon as the traveling bug bites me again! So start emailing me your best Philippines pictures (raeknightly@gmail.com)!

I have a lot of friends who aspire to be authors, and I’m sure you have a lot of tips that you could share with us but if you could only give one tip, what would that be?

I started publishing in 2018, so this is still a recent career-change for me. I thought writing was a pretty lonesome thing – just me and my computer – with authors walking all over each other to get into the limelight. As it turns out I couldn’t have been more wrong. One of the most valuable things I’ve learned is that authors who support each other will go a long way. You see, each author has a fan-base, or a pool of target readers anxiously awaiting new books. So when authors who write in the same genre get together and promote each other, they are basically putting each other in front of their fan-bases. In this way, everyone turns out a winner: authors find new readers, and readers find new authors. Publishing is far from lonely. I couldn’t have done it without the help of editors, book cover designers, beta readers, arc readers, fellow authors, fans,… So if you’re an author, don’t close yourself up in a cocoon, but create a tightknit community where everyone supports each other. 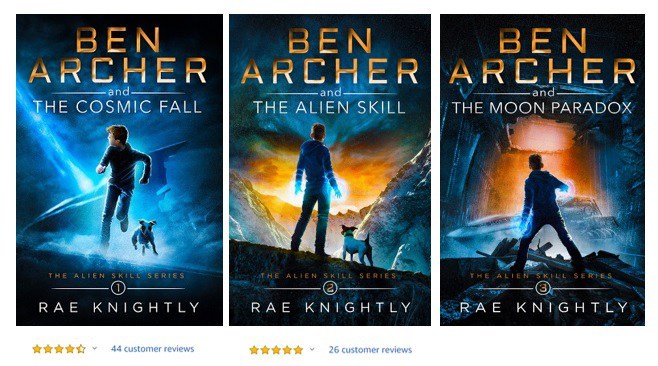 I would like to talk about your book series next! How did Ben Archer and the Alien Skill come to be?

The Alien Skill Series was actually supposed to be a short novella (!). I have lots of complicated stories floating around in my head, but I figured I needed to start with something ‘simple’, just to prove to myself that I was capable of writing something from start to finish.
The idea for the “novella” surged during my long commuting hours to/from work. I’d be stuck in traffic for hours and I’d get really bored. One day I was stuck behind a dirty van. The only markings that remained on it were the peeling letters M-E-S-M-O. I kept on staring at those letters, wondering what they could have stood for, but since I couldn’t figure it out, I thought, “Ok, then, I’m going to invent a short story about Mesmo.” I had no idea what or who Mesmo would turn out to be, but it was a good a start as any…
Fast forward three years later, and Mesmo has turned into an alien man who crashes to Earth, and my “novella” has turned into a three-book sci-fi series for teens, with another three books coming in 2020.

Hm, that’s a tough question because developing different characters is really fun.
I guess I enjoyed creating the bad guy, Bordock, and making him e-e-e-vil! It was easy because as an alien shapeshifter, I could make him bad without offending anyone. On the other hand, I really enjoy Kimi’s strength and intelligence and there’s a new character coming – Jeremy Michaels – who I had fun placing in awkward situations (poor guy).
And, last but not least, I have to say I’ve been extremely proud watching my main character, twelve-year-old Ben Archer, grow into his alien skill and using it as a true superhero would!

I love reading about magical powers and extraordinary skills, so the Alien Skills really intrigued me. Will readers discover more alien skills as the book progresses?

Oh, definitely! Ben Archer’s alien skill is going to leave you with your jaw-dropping. Just recently, I was working on the first draft of book 5, when Ben’s alien skill did something totally unexpected and terrifying. I think my heartbeat as fast as Ben’s did when we ‘both’ realized this new aspect of it. It was also interesting to reveal why Ben’s superpower is making him sick in book 2.
Mesmo’s skill is a ton of fun to work with since he can manipulate water (and there’s lots of that lying around on this planet). It has come in extremely handy at appropriate moments.
There will be other alien skills worth mentioning, but here I am getting ahead of myself…

As I understand it, The Alien Skill series ends at Book 3. Any chances a second series from the same universe will emerge?

On April 9, 2020, I will publish the fourth book in the series. It is called “Ben Archer and the World Beyond”. Ben takes responsibility for the power and wishes to use it for good, but things don’t go as planned. Around June 2020, I will publish “Ben Archer and the Star Rider” and in September 2020, the last (?) book in the series will be “Ben Archer and the Toreq Son”.
You can find out more about these upcoming releases by following my social media (@raeknightly on Facebook / Twitter / Instagram) or by joining my newsletter where I do secret book cover reveals, run contests, send excerpts, inform of upcoming promotions, etc. (www.raeknightly.com).

Before I end the Q&A, I would like to do a segment called “Fast Talk”. Please answer whatever pops up on your mind when you read the prompt!

I’m a translator and speak four languages (English, French, Dutch and Spanish). No, I’m not kidding. When you read about Ben’s skill, you’ll understand this private little joke I played on myself.

> Animal companion to bring on an adventure.

And that concludes my little Q&A with the author. I would like to say a huge thank you to Rae Knightly for agreeing to do this with me! If you want to find out more about her and her books, you can check out these links:

And check out these links if you’re interested in diving into Ben Archer’s world!

Ben Archer and the Cosmic Fall

Ben Archer and the Alien Skill

Ben Archer and the Moon Paradox